March 2012 in Hawaii
OK, I have no photos yet, but here's my reviews of teh wedding, which was absolutely perfect.
Ceremony/Reception Venue: Outrigger Reef Hotel, Voyager Deck
Cara was our contact there, and she was amazing.  She always answered questions quickly and they were totally willing to accomodate changes where w wanted them.  We went with one of their packages, so it included flowers, Hawaiian guitarist, Groom's lei, etc.  We also added on a clear top tent and entertainment.
The food was amazing.  Everything, including the plates were hot when served.  Everything was cooked perfectly and still hot.  Everyone also said teh apps. were great though we didn't get to try them.  We did a seated meal with dessert buffet.  The waiters also took drink orders diuring dinner if guests wanted, then came around with coffee/tea.
Everything that we needed put out on tables was done, we just handed everything to Cara before hand.  The bamboo trellis was set up with gauzy fabric and flowers, and we had petals lining the aisle, then tiki torches along the back.  I always figured there would be some glitch or something to go wrong (nothing big), but everything ran like clockwork and the team at the Reef was amazing.  Best decision we made, going with them.
Arch where we had the ceremony:

Centerpieces (flowers done through the hotel, I don't know who the vendor was):

Reception, same place as the ceremony, but at the back:

Officiant - Kahu Bruce
What can I say.  All the previous reviews about him were bang on.  We met at the Dept. of Health and he helped with the license, then took us through the ceremony.  He lead everyone through the ceremony, directed guests, parents, us.  It was all taken care of and we didn't need to think.  Everyone was amazed at the ceremony he did.  I would suggest him in a heartbeat.  The Hawaiian touches on the ceremony were exactly what we wanted.
Cake - Kristen at A Cake Life
I think we had the best tasting cake ever.  The buttercream frosting was amazing, yet it looked like fondant.  She did exactly what we had wanted, and it looked so amazing that I didn't want to cut into it!!  It was super tasty, adn she was great about working with us on a bit of a last minute timeline after we couldn't book our original choice.
Our awesome cake:

Entertainment - Malu Productions
We hired them through our package - they were an add-on.  They put on a 40 min journey through the Polynesian Islands of dance, drumming, songs and fire knife dancing.  They even got FI up on stage with myself (an amazing feat to get him up there) to dance, after some other guests, so I suppose that was our first dance together.  It was just the right length and it was an amazing show.  Guests have now decided against a luau, and other who have been in the past said this was a better show.  We even got stopped after by hotel guests whose rooms over look the deck.  They say the stage, figured it out and ran out for sushi and wine which they then enjoyed from their lanai.
Photographers - Shandro Photos
We brought our photographers down with us, but I already knew they were amazing, as they did my Brother's wedding.  I can wait to see the photos.  I saw some on the digital screens which looked amazing.  We have our second shoot tonight.  Yay!!
The only shot they will give us so far:

After Party - Shorebird Restaurant
We're not huge fans of dinner here, but the after party was great.  We had to move from the deck at 9pm due to noise so we moved downstairs to the restaurant.  They do karaoke from 9:30 on.  They took our reservation easily and immediatly set up everyone on seperate tabs as we were not hosting this portion.  It was great fun, especially when some of our teenagers got up to sing Grease. It was a great place to end it.
Video - Wedit.com
We weren't planning on doing a video, then wavered, so we went with wedit.  They sent us 5 HD video recorders (flip cameras??) adn a charger in a little case.  We ahve been using these all week, at out WP day, planned activities, etc., so we've got lots of god footage so far.  They will send us a copy of all the footage on DVD, will host it online for 1 year and if we're interested, we can pay them to edit a video for us too.  So far, they've been great and lots of fun to have around.
Hair/Make-up - Leslie Gallagher
I feel that I had some communication issues at the beginnng, such as not having a time when we were going to meet until I e-mailed to ask, but once she got there, the work was amazing.  Make-up looked great.  Both myself and my MOH arent' big make-up/hair people, and she was able to take our vague descriptions and gie us exactly what we were thinking.  I got a light smokey eye.  She does airbrush and old school makeup.
Hair was amazing.  She went based on our photos then added flowers.  She had this much more thought out than I did as she placed all of the flowers on the right /beck of my head (I was thinking left before, but never told her this).  She then said since I'd be on the left side of the  aisle, everyone would see the flowers all ceremony.  She also laced them all individually so it was almost like a bit of art.  It stayed all night and looked great.

Back of the hair:

Dress steaming - Kathy Porter from Aloha Wedidngs
She did FI suit and my dress.  She did a fantastic job on both and also come right to the hotel room to do it.  Totally recommend her.
I'm feeling like I've missed someone for sure.  I can't have imanganed the day going any better.  It was amazing and I'm so glad we chose to go away to get married.  Even Fi (wait, DH now?? ) who wanted to elope (but was ok with the wedding) thanked me after for not letting us elope.  My parents also said they're glad my brother got married first, cos it would be tough to follow that one.

I promise I'll post photos as soon as I can, as those will helo with reviews too.
Here's some of my favorite photos so far:
Me and MOH arriving: 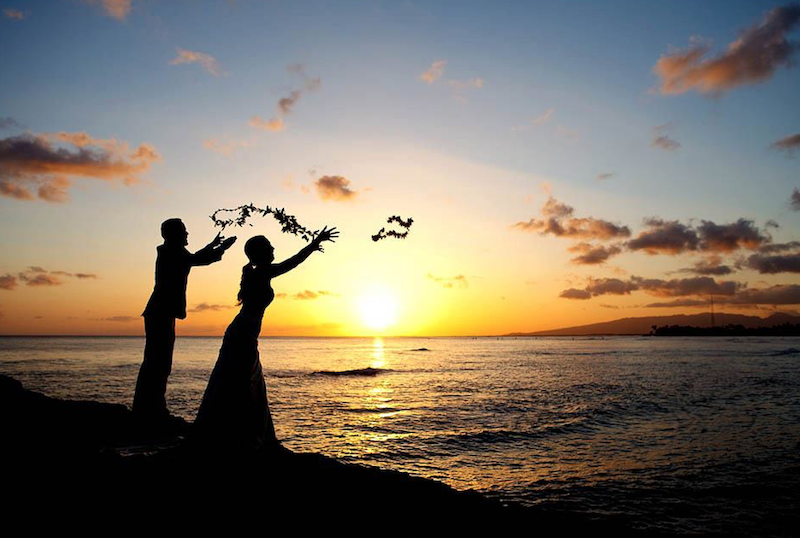