Death for one, please! 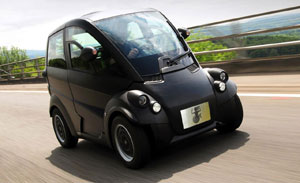 The tiny-city-car segment may soon get a little more crowded. (Wait—maybe that’s not the right word.) After a heck of a wait, Gordon Murray Design has announced plans to bring the T.25 city car to market within the next few years. The company has now released photos and specifications for the pocket-sized machine.

At 94.5 inches long and 51.2 wide, the T.25 will be a seriously small vehicle. GMD says that three of them will be able to slot into a standard parallel-parking space side-by-side. Planned curb weight is just 1265 pounds. The dimensions mean the T.25 will cast a far smaller footprint than the Smart Fortwo. Indeed, we think the narrow, tall design looks like a cross between the Smart and a Tango electric vehicle. The body is made from recycled plastic and is mounted on a tubular chassis. Both front and rear suspension designs are independent, with non-power-assisted steering and safety tech like ABS and stability control.

The entire front end hinges forward to allow ingress from either side of the vehicle, requiring less space around the T.25 than a design with traditional swing doors. The driver sits along the car’s centerline, just as he or she did in the McLaren F1, which GMD says yields good visibility and “A unique, ‘cool’ and fun driving experience.” With just the driver’s seat in place, the T.25 offers 25 cubic feet of cargo space—the same as fits behind the rear seats in a Cadillac CTS Sport Wagon. Two passenger seats can also be fitted, trimming luggage space to less than six cubic feet. 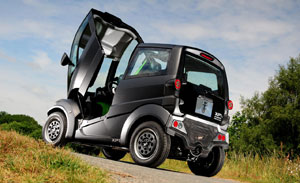 Power will come from a 660-cc, three-cylinder engine rated at 51 hp and 42 lb-ft of torque coupled to a five-speed sequential transmission (here’s hoping for smoother shifts than the Smart’s automated box). GMD predicts fuel economy of 74 mpg by British standards; figure closer to 60 mpg with the EPA’s measurements. Top speed will be governed at 90 mph, and 0–62 mph should require a leisurely 16.2 seconds.

The company has yet to announce when, where, and through what dealer network the T.25 will be sold, though initial sales are most likely to be in Europe and Asia. Also unknown is when (if ever) the T.27 electric version will debut. As we’ve noted before, the head honcho at Gordon Murray Design is the same Gordon Murray who designed the McLaren F1 supercar. We don’t know whether that’s a good or bad sign for the T.25’s chances of reaching production.

Re: Death for one, please!