This Week's Leaders in July 2013 Weddings

On 12/25/2013 my boyfriend surprised me with 4 big words "Will You Marry Me?" Every year his mother’s side of the family celebrates Christmas with a talent show. Both individually & in groups, they sing, dance, and put on skits that are judged on a scale of 1-5. This year was the third year I sat on the judge’s panel. There were 3 acts before the big fourth act, his cousin sang, there was a synchronized swimming skit, and there was a Zumba class lesson act. The fourth act included his brother and sister doing a rendition of "Marry You" by Bruno Mars. It didn't seem too odd to me as they sang "Home" two years ago. When the fourth act started and Tom's sister came out in the wedding dress chills ran down my body.  I was unsure if this was for me so I remained calm and collected. I didn't want to overreact if it wasn't for me! Two and a half minutes in his cousin from his father's side of the family appeared which is when I knew that he was going to propose. I instantly through my hands up and said "Oh my god!" Then my sisters and parents come out and I was so overwhelmed with joy. I was amazed that mine and his family had done this for us. They dropped 3 dozen white roses into my lap, threw their hands up, and there was the man that I had grown to love so much more in that moment. As he walked closer I focused only on him not even hearing the noise around me. When he got down on one knee, my mind was blank and all I could focus on was him and only one word came to mind, "YES!" Here is the video: 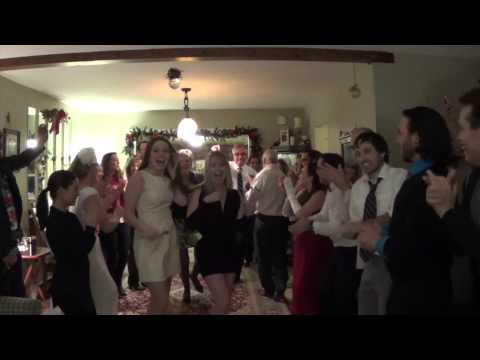 We are so excited to begin this journey!