February 2014 edited February 2014 in Wedding Customs & Traditions Forum
My fiance is first generation Armenian and I'm just run of the mill American. We are having a mixed cultural wedding. The ceremony itself will be more American than Armenian, but the reception will be about a 50/50 split. The thing I'm most worried about is our grand entrance and how my family will react.
The plan is to start American, probably with Hall and Oats "You Make My Dreams Come True" when the parents and bridal party comes in. But then when it is our turn- it is going to turn full Armenian. Two musicians playing a wind instrument and drums will go in before us and we'll go out onto the dance floor dancing. There will be dancing for probably 10-20 minutes and then people will sit down and the party will start.
It works kind of like this, but it usually goes for longer and more than just the bridal party jumps in (jump to 8:25 if it doesn't do it for you): 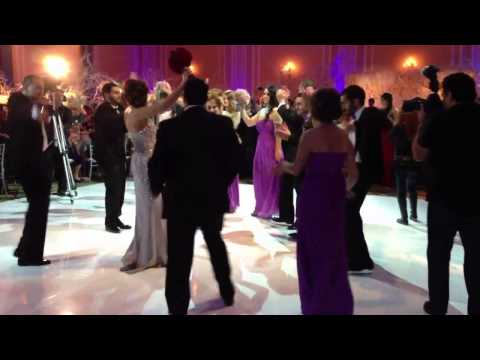 So anyways, I'm worried about how my family will react. I don't want them to feel alienated as my fiance's family jumps in. Additionally, most of my wedding party isn't Armenian, so we have to get them up to speed and I know it will be a little uncomfortable for them. That said, this is something that is very important to my fiance that we do, and his aunt has already booked the band.
Are there any thoughts for how to cut back on the culture shock and encourage my family to take part? My thought was to have a quick dance lesson during the cocktail hour. Nothing too serious, just some sort of ice breaker. I'm also going to put a note on the program that we are marrying two cultures and that it will be reflected in the wedding.
As another note, 99% of my family has met Aren and they know about his culture so it's not like it is going to come out of left field, but they haven't been immersed in the culture beyond eating some Armenian food at our house. I think during the duration of the reception they'll get more comfortable and dance to the Armenian music, but I don't think they'll feel comfortable during the grand entrance. And maybe that is ok and I'm just overthinking this???